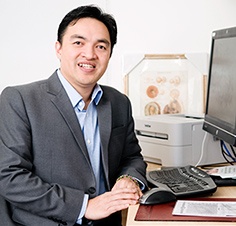 Dr Binh T Ly is a well-known, respected obstetrician and gynaecologist. His lovely, caring bedside manner is valued by all in his care. Binh values time with his patients, ensuring they are comfortable and well informed. He demonstrates a high level of clinical expertise and professionalism at all times.

Binh arrived in Australia in 1981, commencing formal schooling in Australia at the age of 8. He was raised by a loving family and resided in Adelaide.

Binh’s love for medicine started early with much interest in science shown from his early primary years. This interest and passion continued through his secondary schooling and in 1990 he commenced his degree. Binh completed his internship by 1997.

In 1999 he undertook and completed his Obstetrics Diploma, working for the Royal Women’s Hospital.
Binh entered the Specialist Training Program in 2001 reaching successful completion in 2007.
One year of his specialist training was completed abroad in Ireland – An experience Binh very much enjoyed and benefited from.

He currently resides in Melbourne and is married with 3 young children. In his spare time he enjoys watching AFL football and supporting his beloved Adelaide Crows, in addition to spending time with his wife and the children’s many activities

In May 2013 Binh joined the Monash Obstetrics group as a principal and owner.
He now consults at the newly appointed clinic at 15 Murray St, Clayton.